The final episode of The Mandalorian season two arrived on Disney+ on Friday morning, featuring a surprise guest appearance and the reveal of a new Star Wars series. 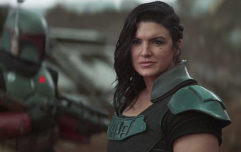 END_OF_DOCUMENT_TOKEN_TO_BE_REPLACED

In the episode's finale, Mando and his crew are trapped on the bridge of Moff Gideon's cruiser, with a horde of Dark Troopers advancing upon them.

Then an X-Wing arrives, and a mysterious Jedi begins taking out the Troopers.

The Jedi then removes his hood to reveal it is Luke Skywalker.

IM ALREADY DYING FROM LUKE'S REVEAL!! GASPING AWAY AND THEN FUCKEN R2D2 POPPED OUT OF NO WHERE AND I ALMOST CHOKED MYSELF TO DEATH!!!!!!!! #TheMandalorian #LukeSkywalker pic.twitter.com/XsESuIoEFM

It wasn't all jubilation though - as some fans were worried about what this meant about the fate of Baby Yoda, following what we know from The Last Jedi.

Luke Skywalker was voiced by Mark Hammill but recreated using CGI. This is not the first time such technology has been used in Star Wars, with Grand Moff Tarkin and Princess Leia making similar appearances in Rogue One.

It is impressive but does have a bit of a disconcerting 'uncanny valley' feel that several fans pointed out.

The Holy Trinity of Well At Least You Tried #TheMandalorian #LukeSkywalker pic.twitter.com/vnmTlaLMGh

But maybe the biggest surprise came after the credits rolled.

In the post-credits scenes, Boba Fett and Fennec Shannd (Ming-Na Wen) travel to Jabba The Hutt's Palace on Tatooine, as seen in Return of the Jedi. Fett then kills Bib Fortuna (who appears to have taken over from Jabba) and claims Jabba's throne.

A title card then appears saying: "The Book of Boba Fett. Coming December 2021."

It is not confirmed yet if The Book of Boba Fett is a stand-alone series, or the third season of The Mandalorian (Boba Fett isn't technically a Mandalorian, but he does wear Mandalorian armour).

Can’t wait. The music for this scene is perfect. pic.twitter.com/BSl2KvwUwI

Earlier this week, it was revealed at the 2020 Disney Investor Day that there are 10 new Star Wars series coming to Disney+.

The Book of Baba Fett was not one of the shows confirmed, but there were several that could tie into it. Rangers of the New Republic will be set during the time period as The Mandalorian, and Rosario Dawson's Ahsoka Tano will also be getting her own series.