Jeff is just saying what everyone else is thinking about Mark

Jeff from Peep Show is one of the great sitcom villains - or is he? What if he is just a normal bloke, and Mark Corrigan is actually the psychopath. 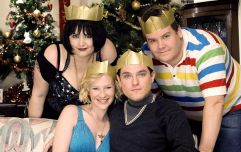 END_OF_DOCUMENT_TOKEN_TO_BE_REPLACED

Neil Fitzmaurice  - aka the actor that plays Jeff - is currently starring in the BBC Two comedy Semi-Detached, so we got to (virtually) sit down with him and discuss the creation of the character - from how Neil was originally brought in to read for Super Hans (that would have been a very different show), to why he always tried to play Jeff as a real person and not a cartoon villain.

“I think Jeff just realises very early on that Mark is an absolute tit.”

Jeff from Peep Show - aka actor Neil Fitzmaurice (@Fitzyfella) - on why Mark Corrigan is the real villain of the show, and Jeff is just a regular guy. pic.twitter.com/jIUE9yOuQL

Semi-Detached is on 10pm on Thursdays, BBC Two and on iPlayer.

popular
Tourist dies after losing arm and leg in shark attack at popular resort
Adele fans have 'mad respect' for her after she stopped her Hyde Park gig to help someone in distress
Jordan Peterson suspended from Twitter over Elliot Page comment - says he won't apologise
Tottenham fans will love Richarlison's Arsenal Instagram message after transfer
The JOE Friday Pub Quiz: Week 301
Threesome sees 60-person brawl break out on cruise ship, says passenger
Vegan mum found guilty of murdering son by feeding him only fruit and veg
You may also like
Entertainment
QUIZ: How well do you remember the football references in Peep Show?
Entertainment
Someone has made a LinkedIn profile for Mark Corrigan from Peep Show
Entertainment
QUIZ: Only true Peep Show fanatics will get full marks on this quiz
Entertainment
Myleene Klass falls for genius Peep Show prank on live radio
Entertainment
Big Mad Andy's ultimate Peep Show quiz
Next Page