Here is your first look at The Mandalorian season two

Baby Yoda is back! And some other, less popular characters

The hit Disney+ Star Wars spin-off The Mandalorian returns for season two on October 30th, and the first images have been released.

Entertainment Weekly has the first images from the second season, and yes, they do feature Baby Yoda.

#TheMandalorian exclusive: First look inside season 2 -- and how the Disney Plus series saved #StarWars https://t.co/XoraELFdsK pic.twitter.com/Z360sNfUxt

Still no news on the long awaited for Season 2 Trailer.

END_OF_DOCUMENT_TOKEN_TO_BE_REPLACED

We also get a look at other returning characters including The Mandalorian himself Din Djarin, Gina Carano's Cara Dune, and Carl Weathers' Greef Karga. There is also a Tuskin Raider riding a Bantha.

But those are not Baby Yoda, so I am less excited about them.

#TheMandalorian strikes back! After an Emmy-nominated first season, @StarWars series creator @Jon_Favreau and executive producer marvels at The Child’s fame and shares the first look at season 2. https://t.co/oiYGDJtdTo Story by: @JamesHibberd pic.twitter.com/rZDyMJpgFc 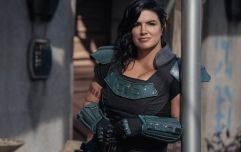 END_OF_DOCUMENT_TOKEN_TO_BE_REPLACED

"The new season is about introducing a larger story in the world," show creator Jon Favreau told Entertainment Weekly.

"The stories become less isolated, yet each episode has its own flavor, and hopefully we’re bringing a lot more scope to the show." added executive producer Dave Filoni. "Everything gets bigger, the stakes get higher, but also the personal story between the Child and the Mandalorian develops in a way I think people will enjoy."

The Mandalorian debuted when Disney+ launched in November last year. Set between the events of Return of the Jedi and The Force Awakens, it follows a Mandalorian bounty hunter named Din Djarin, played by Pedro Pascal. He is accompanied on his journies by 'The Child' - aka Baby Yoda.

And while the show was generally well-received, it was Baby Yoda that really grabbed people's attention. The adorable character was instantly meme'd and the internet fell in love with him.

The Mandalorian is not the only new Star Wars content coming to Disney+ this year. The LEGO Star Wars Holiday Special is due to arrive in November, paying homage to one of the most infamous parts of Star Wars history.

popular
Ukrainian refugee who ran off with dad finally speaks out and blames man's partner for split
Shocking moment lion rips off man's finger after he sticks his hand into zoo cage
Noel Gallagher left 'covered in blood' after headbutt from Ruben Dias’ dad
Liverpool crowned Premier League champions, but only on aggregate
Amber Heard explains why people do not believe her in Johnny Depp trial
Topless mum in her undies rescues pet goose from bald eagle in crazy video
You could be fined £1,000 fine for sharing speed camera locations to friends
You may also like
Film
Rian Johnson's Star Wars trilogy is still happening
Football
David Moyes compared to Emperor Palpatine from Star Wars in this post-match interview
Film
Daisy Ridley says she "wept all day" after The Rise of Skywalker wrapped filming
Television
Rosario Dawson shares time-lapse video of her incredible make-up in The Mandalorian
Television
The Book of Boba Fett is an original series coming in 2021, Disney has confirmed
Next Page