"Pete will be dearly missed by the entire Gogglebox family, cast and crew."

Gogglebox star Pete McGarry has died at the age of 71 following a short illness.

END_OF_DOCUMENT_TOKEN_TO_BE_REPLACED

In a statement, the show said: "We are deeply saddened to announce that Gogglebox star Pete McGarry passed away at the age of 71 this weekend with his family by his side after a short illness.

"Pete will be dearly missed by the entire Gogglebox family, cast and crew. Our thoughts are with Linda, their children and grandchildren."

"Since 2000, Pete and Linda have fostered over 100 children and he is a beloved father, husband and grandfather.

"The family have asked for privacy at this sad time."

The statement added that the 71-year-old's death was not related to Covid-19.

Pete will be dearly missed by the entire Gogglebox family, cast and crew. pic.twitter.com/1xd0DgwREO

The McGarry family - consisting of Pete, his wife Linda and son George - had joined the show in 2013 before leaving in 2014. However Linda and Pete rejoined in 2016, and have been much loved regulars of the show. 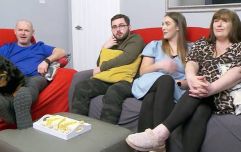 Gogglebox fans have only just realised the Malones have another child

END_OF_DOCUMENT_TOKEN_TO_BE_REPLACED

The couple had previously spoken about their love for fostering as well, with Linda describing fostering as something that had "enhanced our lives so much. It's very rewarding. I've just loved doing it."

She once told the Daily Star: "I always say all you need to be a foster parent is a spare room, a sense of humour and a good heart.

"I've just brought them up as my own. On Mother's Day I get so many phone calls. They don't forget you. A lot still regard me and Pete as their parents."

popular
Ricky Gervais finally says what we're all thinking about the Johnny Depp Amber Heard case
New Time Traveller's Wife series airs 'incestuous' oral sex scene that has left everyone divided
Binley Mega Chippy: What is it and why is it all over my timeline?
Japanese man spends £12,480 to look like a border collie - and it kind of works
The JOE Friday Pub Quiz: Week 296
Wimbledon to drop Mrs and Miss on women’s honours board to match men's titles
Gangland enforcer charged £6K to attack victims with acid and £10K to blind them
You may also like
Entertainment
A Brooklyn Nine-Nine one-off special is nearly here
News
Nadine Dorries appears in TikTok video - proves she also knows nothing about the internet
News
Senior Tory MP says Channel 4 privatisation could be politically motivated
Entertainment
James Buckley rules out any chance of an Inbetweeners return
News
Former Channel 4 Dispatches researcher jailed for life for torturing father-of-two to death
Next Page