You can say that again.

Sir Alex Ferguson was a huge admirer of Zinedine Zidane during the mercurial Frenchman's playing days. Indeed the former Manchester United manager once famously quipped: "Give me Zidane and ten pieces of wood and I'll win you the Champions League." 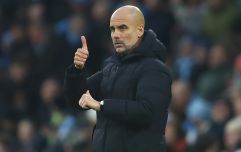 END_OF_DOCUMENT_TOKEN_TO_BE_REPLACED

There was even some interest in bringing the player to Old Trafford when he was still plying his trade in France for Bordeaux. Alas it never transpired, but it's one of football's great what-ifs, had he joined his compatriot Eric Cantona at the Theatre of Dreams.

Since hanging up his boots for good back in 2006, Zidane has achieved more than most in his still short managerial career, boasting three European Cups and winning La Liga twice at Real Madrid. But even he admits that he'll never match Ferguson for longevity and long-term success at one single club.

Following his side's vital 2-0 victory over Borussia Mönchengladbach in the Champions League on Wednesday night, which secured last-gasp qualification to the next stage of the tournament, Zidane admitted his time at the Bernabeu was limited and he could never be another Sir Alex.

"I don't know how long I am going to stay here," he told reporters candidly. "I am very lucky to be at this club and I like being happy even in the most difficult times. I have lived in Spain, in Madrid for a long time and I want to carry on a while longer." Referencing arguably the greatest manager of all-time he admitted: "I'll never be Madrid's [Sir Alex] Ferguson, that's for sure!"