The Irish champions narrowly missed out on qualification for the Champions League group stages, and had to settle for a place in the continent's second most prestigious club competition.

Stephen Kenny's side will battle it out with  Zenit St Petersburg of Russia, AZ Alkmaar of the Netherlands and Israeli team Maccabi Tel Aviv.

Reacting to the news that they will face Dundalk, Zenit reacted to the draw by tweeting a Gif of an angry leprechaun - a mythical creature that was once associated with derogatory stereotypes of Ireland.

Zenit St Petersburg tweeted this (and deleted it) in reply to their Dundalk draw pic.twitter.com/iEM6UGoa5l

And here's the Gif: 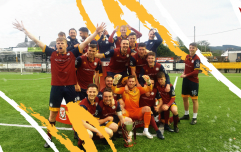 END_OF_DOCUMENT_TOKEN_TO_BE_REPLACED

Dundalk's first match in the competition will be on September 15, when they travel to the Netherlands to face AZ Alkmaar. After hosting Maccabi Tel Avib in their next match, Dubdalk will welcome Zenit to Ireland on October 20 before the return fixture on November 3.

popular
Arsenal-bound Willian posts farewell message to Chelsea fans
QUIZ: Name every WWF champion from the Attitude Era
The 11 unbreakable rules of making a cup of tea
Ben Stokes to miss remainder of Pakistan series
The JOE Friday Pub Quiz: Week 203
Young guys absolutely lose it hearing Phil Collins' In The Air Tonight for the first time
Who is the most handsome footballer in the Premier League?