Russian Premier League outfit Zenit St Petersburg have received a whopping offer to change their name to 'Zenit Burger King,' according to reports in Russia.

The American fast food behemoths approached the club at the start of the week with offer of 500m roubles (£5.75m) to purchase the club's naming rights with Russian journalists getting hold of a letter allegedly sent from Burger King to the club. 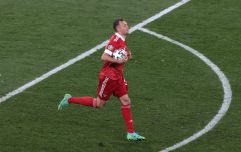 END_OF_DOCUMENT_TOKEN_TO_BE_REPLACED

Although the name change would make any future European fixtures against Hamburger SV loaded with so many terrible joke possibilities that commentators would cream themselves into a deep coma, it's not going to happen as Zenit have apparently rejected the offer.

And too rightly - since Burger King insulted pun fans around the world by not asking the Russians to change their name to 'Zenit St Petersburger'.

Zenit have received a €6.8-million offer from @BurgerKing to change team's name to "Zenit Burger King". 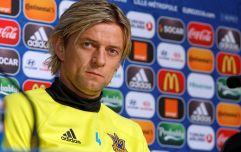 END_OF_DOCUMENT_TOKEN_TO_BE_REPLACED

Is this the way that football is going?

It might not be a lot of money in footballing terms - especially not to sell your club's soul like this - but to be honest, for that amount of money, I would be willing to have myself surgically modified to look like the Burger King himself.

Alas, I am not a football club and so my dream must die.

popular
Groom shoots friend dead by mistake after firing shot in celebration at his wedding
The JOE Friday Pub Quiz: Week 300 - the Triple Century
'Dinosaur lady' wins internet with baffling Question Time remark on rail strikes
Seven awful films rated higher than Pogba’s “Pogmentary” on IMDB
Johnny Depp's lawyer Camille Vasquez annoys fans amid rumours she may defend David Dobrik
Russian missile does a U-turn during malfunction and smashes into troops who fired it
A definitive ranking of every swear word from worst to best
You may also like
Sport
Zenit St Peteresburg exit Europa League after late VAR controversy
Sport
Zenit drop Ukrainian defender Yaroslav Rakitskiy for speaking out against Russian invasion
Sport
Zenit players take dogs on pitch in bid to get them rehomed
Sport
Dejan Lovren tries to chest ball back to goalkeeper, scores comedy own goal
News
Russian pilots under investigation for drawing penis on flight map
Next Page