We thought 'bottle-gate' was all said and done with. No one told Xhaka, apparently

Football fans are still reeling from last night's shocking result as Switzerland dumped favourites and current world champions, France, out of Euro 2020. Though they hadn't looked at their swashbuckling best in the tournament yet, no one expected them to exit the competition in the first stage of the knockout, surely? 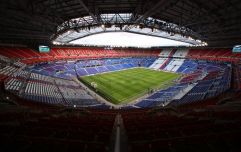 END_OF_DOCUMENT_TOKEN_TO_BE_REPLACED

The round of 16 tie in Bucharest went to penalties after the French bottled a 3-1 lead with less than 10 minutes to go and, ultimately, the Swiss went through after a misfiring Mbappé missed the fifth and final penalty. However, it was their opponents' spot-kicks that buried the tie and one player who was particularly on fire was Granit Xhaka.

Xhaka went toe-to-toe with Pogba and Kante in the middle of the park.

Inspired his teammates before the penalty shootout.

Picked up the MOTM award. pic.twitter.com/KK4GTDrBNa

Now, this is by no means to suggest that Xhaka is not a good player - he plays at a 'top six' Premier League club and captains his national team, so he must be doing something right - but it's fair to say that last night's performance was better than most of those we've seen of him in an Arsenal shirt.

He was many pundits' man of the match on the night and also buried his penalty with aplomb too. The reason behind his stellar performance you reckon? Well, we don't want to drag up old news and promote fizzy drinks over "Agua!", but maybe Coca-Cola isn't so bad if you need an energy boost in a European Championship.

You’re telling me Xhaka played 120 minutes, and then proceeded to crush a Coke while motivating his teammates to bury France in PK’s?!? 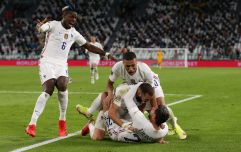 END_OF_DOCUMENT_TOKEN_TO_BE_REPLACED

That's right, the 28-year-old was captured at multiple angles completely necking Coke before his team faced up against Didier Deschamps' men in the penalty shootout. Judging by the sheer energy with which he played throughout the 120 minutes, we reckon it probably wasn't his first of the night and he was literally everywhere.

France might have done enough to turn on the style for a while and drag the game to penalties, but Switzerland were hard-fought all game and deserved to make it beyond 90 minutes, and a huge part of that was Granit Xhaka.

We may only be joking when it comes to the Coke driving him on (not that kind) - the adrenaline probably did enough heavy lifting - but it does add yet another layer of hilarity to Euro 2020's 'Bottle-gate' saga.