There wasn't a dry eye in the house as Barcelona said goodbye to legendary midfielder Andres Iniesta.

Over 600 appearances in 16 seasons at Barcelona later, the Andres Iniesta era at Barcelona is over. The club held a special ceremony to mark the end of his tenure in Camp Nou on Friday. 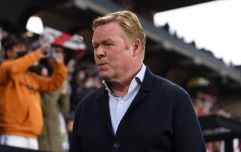 END_OF_DOCUMENT_TOKEN_TO_BE_REPLACED

The invitation-only event featured current squad and coaching staff, former teammates, coaches, plus family and friends all in attendance.

It kicked off with an emotional video documenting Iniesta's rise from the youth academy all the way up to his success with the senior squad. Fair warning, you might want to have a box of tissues handy before you watch the video embedded below.

After the video, the man of the hour went up on stage to give a speech, quotes via AS English: "Being honest, it's really difficult. It's hard to accept it after all this time. I'm trying to enjoy it. I'll try to enjoy Sunday when I say goodbye to what's been my home. It's very emotional".

The occasion got to Iniesta's former midfield partner Xavi, who was seen wiping away the tears as Iniesta said goodbye to his 'home'.

When it was Xavi's turn to take the stage, he had nothing but kind words to say about the fellow legend. He said:"He just did everything right. He'd just come up [to the first team] and he did it all perfectly. And he's an example of everything that's good, he's a leader, great team-mate, he's always thinking about the team."

He closed off with a simple message to the outgoing playmaker. 'You're a legend, no matter where you go, you're a legend".

*Sniff sniff* We think there's something in our eye.