Scoring a goal is a big deal.

Qualifying for the World Cup is an even bigger deal. But is it a big enough deal to cause an earthquake? 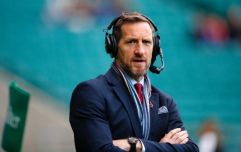 END_OF_DOCUMENT_TOKEN_TO_BE_REPLACED

On Thursday, Peru beat New Zealand 2-0 in the second leg of their World Cup playoff, booking their place in the finals for the first time since 1982. Striker Jefferson Farfan put Peru ahead in the 27th minute, and that’s when something very unusual happened.

Sismo Detector is an early warning system designed to detect seismic activity and warn people about potential natural disasters. Just after Farfan scored, it registered an impending earthquake in the Peruvian capital of Peru.

There was no reason to be worried though - Siesmology Chile (an organisation associated with the Sismo Detector) quickly clarified that was not imminent, it was just the Peru fans celebrating too hard: “Sismo Alert Detector would have activated in the District of Lima due to the celebration of Peru's goal to New Zealand.”

A statement explained that “at the exact moment” that Peru scored “the emotion of the Peruvians made the application activate” with the “ground vibration generated by the fans”.

popular
Ava White, 12, dies after Liverpool stabbing - four boys aged 13 to 15 arrested on suspicion of murder
Tobey Maguire Spider-Man spotted in No Way Home merchandise
Over 200 kilos of cocaine with Liverpool FC branding seized
The JOE Friday Pub Quiz: Week 271
A definitive ranking of every swear word from worst to best
Pro Volleyballer spends £590K believing he was dating supermodel Alessandra Ambrosio for 15 years
Here's how to see who's been taking screenshots of your Instagram Stories
You may also like
News
Māori tribe tells anti-vaxxers to stop using the haka in their protests
Sport
"Yes, man, straight up!" - All Blacks star Ardie Savea on what rugby can learn from the USA
Sport
Kiwi cricketer ruled out of T20 final after punching bat
News
Jacinda Ardern warns service workers they could be sacked if they don't get jabbed in a month
News
New Zealand rugby star Sean Wainui dies in car crash, aged 25
Next Page