VAR has not been a roaring success so far, but it's not all doom and gloom

Every attempt to introduce VAR technology into football has either failed miserably, or created more problems than it has fixed.

That is of course a subjective opinion but the delays seen in this summer's World Cup, the numerous controversial decisions made in last summer's World Cup, and fans in stadiums being left oblivious to what is going on have led me to believe that it probably isn't worth the hassle.

Mistakes happen in football and while unfortunate, human error is part of the game.

Nevertheless, the anti-VAR brigade are very much swimming against the tide and we must accept that it's here to stay. But sceptics can put their pitchforks down for now, as the aforementioned problems are unlikely to cause such havoc as they have done in the past.

At the famous "studio near Heathrow airport", managers, captains - and luckily, some journalists - were given a talkthrough on how the technology will be used this season. It is clear that the Premier League has learned from the mistakes made by other footballing bodies, as the mantra of "maximum benefit, minimum interference" is hammered home like a Harry Kane penalty.


A Video Assistant Referee will be watching the game in front of set-up that every teenage boy fantasises about having in their 'man cave' one day. The match in question will be played from every camera angle available, depending on the stadium. They will also have an assistant to their left, who watches the game on a three second delay to ensure that no incident is missed while the VAR is occupied, and a recording operator to their right.

END_OF_DOCUMENT_TOKEN_TO_BE_REPLACED

They will of course only be looking to intervene in four types of incidents: awarding a goal, a penalty, a red card, or in a case of mistaken identity, and intervention will only be made if they are, you guessed it, "clear and obvious errors." That definition sparks another debate over what constitutes an obvious error, but the solution is simple: it must be unanimous among the VAR staff. If there is any doubt over whether or not the on-field referee has made an error, the VAR will not step in.

Once the VAR has intervened, the on-field referee will gesture that a decision is being reviewed once there has been a break in play. The team in west London will have been reviewing the incident in question before this stoppage, and will advise the referee on whether they should reverse their decision or not. The on-field ref is not obliged to act on this advice.

The VAR for each match will be able to hear every conversation between on-field referees, and will receive constant explanations from them regarding every big decision they make on the field. But the VAR will not enter the conversation unless absolutely necessary, and they will do so using the big green button pictured above, in order to minimise confusion and allow the referee to think as clearly as possible in the midst of the blood and thunder intensity of the Best League in the World™️.

And when it comes to informing the fans in the stadium of what the hell's going on - the biggest problem VAR has faced on these shores - the big screens in 18 of the 20 Premier League grounds will come into play. Graphics will appear on the screens informing fans that an incident is under review and what type of incident they are looking at.


Once a decision has been made, the graphic will change to "check complete", and the referee will either reverse his decision, or stick with his original call. 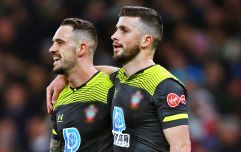 Can you name every English football league club that begins with 'S'?

END_OF_DOCUMENT_TOKEN_TO_BE_REPLACED

At the two grounds without big screens - unusually, Old Trafford and Anfield - LED screens around the edge of the pitch and PA systems will be used to communicate with fans. Talks have taken place between the Premier League and Manchester United and Liverpool about the possibility of installing big screens at their respective stadiums, but potential losses from ticket sales that would arise as a consequence are proving an obstacle.

Most of the delays that have occurred since VAR's introduction are a result of the on-field referee spending too much time in the referee review area (RRA). During this summer's Women's World Cup, VAR caused delays as long as six minutes.

This will not happen in the Premier League, with the RRA only being used as a last resort. Given the VAR has a better vantage point of every incident in question, there is very little necessity for the RRA to be there at all.

There will inevitably be some teething issues, but sceptics can take some solace in the fact that the Premier League has already identified the biggest issues with this robotic snitching system and has taken action to minimise those problems.


popular
Grant Imahara, co-host of Mythbusters, has died aged 49
Clive Tyldesley replaced as ITV's main football commentator
QUIZ: Identify 99 movies from the 90s by a single image
Can you name every English football league club that begins with 'S'?
Wesley Sneijder begins training with fifth tier Dutch side, eyeing up top level return
The JOE Friday Pub Quiz: Week 199
A definitive ranking of every swear word from worst to best