The reason for Alexandre Lacazette appearing on Barcelona's website

Calm down, breathe, there is a very simple explanation

Twitter was sent into a frenzy this afternoon – which, admittedly, doesn’t take a lot – after images were posted showing Alexandre Lacazette being listed on Barcelona’s club website under the ‘players’ tab.

Arsenal fans descended into panic. Was their Player of the Season winner set for a move to the Spanish champions? He was listed as wearing Luis Suarez’s number 9 shirt, too, which he wears for Arsenal.

Was this a slip-up on Barcelona’s end? Had someone let the cat out the bag? As it turns out, no, they hadn’t. While the web page does appear to show Lacazette as a Barcelona player, the Frenchman does not feature on the page which lists the first team squad.

The reason Lacazette has a page on the website is that, for some reason, Barcelona list every player to have played against them on their site.


In the url that takes you to his page, there is a four-digit code. Change that code to another four-digit combination and it will take you to another page of a player who happens to have played against Barça. Look: 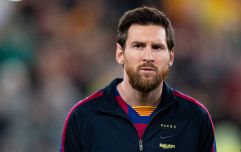 END_OF_DOCUMENT_TOKEN_TO_BE_REPLACED

It does seem unlikely that Simone Ganz will be joining the Spanish champions this summer.

So, there you go, Arsenal fans. No need to panic. Lacazette has not joined Barcelona. You can go back to hijacking polls on Twitter now.

Lacazette has been linked with a move to the Camp Nou recently, hence why someone would find this page and drop it onto the timeline like a grenade. The striker said he was "flattered" by the club's reported interest, though it looks unlikely that he will leave Arsenal this summer.

Barça are on the hunt for a long-term heir to Luis Suarez, and have also been linked with Everton's Richarlison.