What would it be like if male athletes were interviewed the same way as female athletes? (Video)

A new campaign called Cover the Athlete has highlighted the difference in how male and female athletes are treated.

Cover the Athlete look to stop the sexist and patronising coverage that often surrounds women's sports, where media coverage often implies that female athlete's bodies are more interesting to talk about than the actual competition being played. 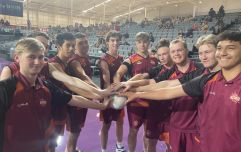 END_OF_DOCUMENT_TOKEN_TO_BE_REPLACED

The group's mission statement reads: 'Something's wrong with media coverage of female athletes. Sexist commentary, inappropriate interview questions, and articles focused on physical appearance not only trivializes a woman’s accomplishments, but also sends a message that her value is based on her looks, not her ability. And it’s much too commonplace.'

They have released a video in which questions posed to professional female athletes are instead put to their male counterparts, and the results are eye-opening.

popular
Graham Norton accidentally posts Garfield and Maguire in No Way Home poster in now-deleted Tweet
Best man horrified after catching friend’s wife cheating with bartender
'I pooed myself on my date's floor - he kicked it thinking it was mud'
A definitive ranking of every swear word from worst to best
Here's how to see who's been taking screenshots of your Instagram Stories
Senegal boss calls out Jurgen Klopp over AFCON comments
Sunderland boss criticised by fans for making gesture after Oxford game
You may also like
News
Raab: 'Misogyny is wrong whether it's man against woman or woman against man'
Life
Teachers told not to call pupils ‘pet’ and ‘buddy’ as they stereotype genders
News
Calling women 'birds' is 'plainly sexist', judge rules
News
Taliban hides female students behind curtain as Afghan universities return
Life
‘Not all incels are violent’: Meet the people helping woman-haters see sense
Next Page