It's Friday. The working week is almost over and you're looking forward to a big night out. Why not give yourself a reminder of the fact that you'll never make it as a professional footballer.

What has sparked this? Well, a chap born in the year 2000 has made his professional debut in one of Europe's top five leagues. 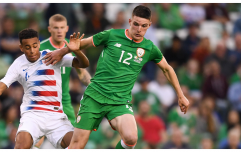 Can you get 100% in this quiz about dual-nationality footballers?

END_OF_DOCUMENT_TOKEN_TO_BE_REPLACED

And if that wasn't enough, he already has four international caps and one goal.

Vincent Thill, who became the first player born in the 21st century to score an international goal when he netted for Luxembourg against Nigeria in March, made his debut for Metz against Bordeaux.

Thill was born on February 4, 2000 - just one month before the release of the PlayStation 2.

Here are a few more stats to put his youth - and our own fragile mortality - into context.

Rise by Gabrielle was top of the charts

The world population was already higher than 6 billion

Graph of World Population since 10,000BC pic.twitter.com/aiQfAnVZej

The Final Destination franchise was new and exciting

And finally, no one knew who Busted even were, let alone the fact that they'd been to the year 3000.

popular
Bette Midler wants the US to ban Viagra because it’s ‘God’s will’ to have a ‘limp d**k’
Travis Barker’s daughter shares picture of Blink-182 star in hospital bed - tells fans to ‘send your prayers’
British teen says she was raped in Majorca hotel by 'famous actor and musician'
Police hunt for two 'laughing' men who kissed three-year-old girl in front of distressed mum
Father takes his own life after 18-month-old found dead in hot car
Jasmine Burkitt death: BBC reality TV star dies aged 28
'You're disgusting': Prince William roars at photographer who was 'stalking' his family
You may also like
Sport
Man City and Liverpool to prevent players from travelling on international duty
Sport
The worst crimes against shirt numbers in football history XI
Sport
Messi's PSG contract includes 'special Argentina clause' after demands from player
Sport
England players’ families pay pen emotional letters ahead of final
Sport
Euro 2020: Everything you need to know
Next Page