It is understood that Saido Berahino has been placed on a special fitness regime after after he was deemed to be overweight before the international break.

The Telegraph are reporting that Berahino was at least 8lbs overweight following tests before the break - and they claim this was the reason why he was left out of the 18-man squad for the game against Tottenham Hotspur on Saturday.

It is the latest low point for a player once rated as one of the great up and coming English talents in the game, who even made the full England squad in November 2014, and had Chelsea sniffing around.

But the striker hasn’t played for the Baggies since the 1-0 defeat at Bournemouth at the beginning of September. He only started 17 Premier League matches in the 2015/16 campaign and sat out a number of games towards the tail end of the season, making 14 appearances off the bench last season.

It is unclear whether he will return to the bench for West Brom's next Premier League clash against Liverpool on Saturday. 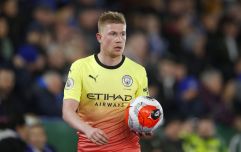 COVID-19: What is the fairest way to resolve the Premier League season?

END_OF_DOCUMENT_TOKEN_TO_BE_REPLACED

Berahino was the subject of failed bids during the summer from Stoke City and Crystal Palace and is expected to leave when his contract runs out next summer.

There are also rumours that he could join a club abroad during the January window, but Baggies boss Tony Pulis is still hoping he will stay with the club.

"It's only my opinion but it would be brilliant for Saido," he said earlier this month.

"He's had a couple of years - four or five transfer windows of uncertainty and that has affected him.

"For him to settle down and sign a new contract would be brilliant for everyone concerned at this football club and personally, for him as well.

"That's important as anything else. I'm sure Saido will come and see me at some stage," he told Sky Sports.

You may also like
Sport
How should football resolve the season if it can't be finished?
Sport
Will coronavirus tarnish Liverpool's title celebrations?
Football
A foolproof guide to actually beating Liverpool this season
Sport
Is Ole Gunnar Solskjaer the worst manager in the league?
Sport
Confidence in football and why strikers feed on it
Next Page