Still not giving up on that Man United move

Wesley Sneijder has begun training with fifth tier Dutch side DHSC, based in his hometown of Utrecht. The former Inter, Real Madrid, Ajax and almost Manchester United player is determined to make a return to top flight football after announcing his retirement in August 2019.

A report from Dutch media outlet RTV Utrecht says Sneijder wants to play for his hometown club if Utrecht in the Eredivisie, something on his "bucket list" having begun his club career with Ajax. In the meantime, he is training with local side DHSC to gain fitness, having not played competitive football for almost a year.

Sneijder most recently played in Qatar for Al-Gharafa after OGC Nice released him with just five appearances under his belt. But his career highlights came a decade ago, when he won the treble with Inter Milan under Jose Mourinho and reached the World Cup final with the Netherlands.


His former international teammate Arjen Robben also announced he would be coming out of retirement to play for his hometown side FC Groningen and help them recover from the consequences of the coronavirus pandemic, 20 years after he made his debut for the club. 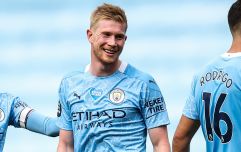 END_OF_DOCUMENT_TOKEN_TO_BE_REPLACED

Sneijder faces a big challenge in returning to the necessary levels of fitness to compete at the top level now, and is seeking the assistance of former footballer and performance coach Iwan Redan, who has told Dutch media he is eager to get Sneijder fit again within four or five months.

Redan worked with Dutch winger Eljero Elia when he moved from Southampton to Feyenoord, helping him shed excess fat and earn a move to Turkish side Istanbul Basaksehir.

It's unlikely that Sneijder will will be able to pique Manchester United's interest again, but you never know. They did sign Bastian Schweinsteiger after all.


popular
QUIZ: Is this a Marvel character, or a DC character?
Can you name every English football league club that begins with 'C'?
Mark Selby slams 'disrespectful' Ronnie O'Sullivan after Crucible elimination
QUIZ: Can you get full marks in this devilishly tricky capital cities quiz?
Why Barcelona will have to pay Liverpool if Bayern Munich win the Champions League
Eat gummy bears for better recovery after a workout, says fitness expert
The JOE Friday Pub Quiz: Week 204

You may also like
Sport
Bournemouth accept £18.5m bid from Sheffield United for Aaron Ramsdale
Sport
Can you name every English football league club that begins with 'C'?
Sport
Arsenal announce departure of head of football as overhaul continues
Sport
Why Barcelona will have to pay Liverpool if Bayern Munich win the Champions League
Sport
How the Spanish press responded to Barcelona's humiliation at the hands of Bayern Munich
Next Page