Wayne Bridge is poised to become the second former West Ham and England player in two years to go on 'I'm a Celebrity...Get Me Out Of Here'.

The 36-year-old, who last played for Reading in the 2013/14 season, follows in the footsteps of former Upton Park teammate Kieron Dyer by signing up to spend some time in the jungle. 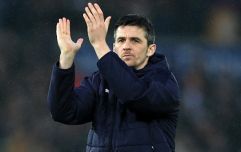 END_OF_DOCUMENT_TOKEN_TO_BE_REPLACED

However, despite earlier rumours, it looks as though former heavyweight boxing champion Tyson Fury will not be involved.

Bridge won 36 caps for England, traveling to the 2002 and 2006 World Cups, and played Premier League football for six different clubs.

However, some have speculated that his inclusion on the show is more to do with the off-field stories concerning his ex-girlfriend Vanessa Perroncel's alleged affair with Bridge's then Chelsea teammate John Terry.

The former left-back will be the sixth ex-footballer to take part in the show, with the most recent - Dyer - donating his fee to charity.

John Fashanu featured in the second series of the reality show, which was won by cricketer Phil Tufnell, while Neil Ruddock, Rodney Marsh and Jimmy Bullard have also taken part.

popular
Here we go again - the government says book your Xmas party. What's 'Plan B'?
Gordon Ramsay's daughter Tilly calls out radio host for 'fat shaming' her live on air
Matt Lucas hits back at outrage over 'offensive' Bake Off German accent
Mum who drove into Insulate Britain in rage says 'I just gave them a nudge'
Watford staff unhappy with Ben Foster's commitment to vlogging on club time
Passengers who allegedly filmed rape of woman on train unlikely to be charged
Nigel Farage says another IRA slogan in latest Cameo trick
You may also like
Entertainment
I'm A Celebrity crew member blamed for sending thousands of Australians into lockdown
Entertainment
I'm A Celebrity relocates to the UK because of COVID
Entertainment
Six things you might have missed during last night's I'm A Celeb
Entertainment
Ant McPartlin will return to host I'm A Celebrity... Get Me Out Of Here in 2019
Entertainment
6 hilarious moments from last night's I'm A Celeb
Next Page