Wayne Bridge has got one hell of a jab on him

The John Terry jokes were always going to do the rounds...

It was suggested that Wayne Bridge had been picturing Terry when the former Chelsea left-back took to the ring for Sport Relief on Friday night. 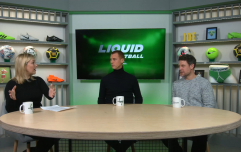 Duncan Ferguson, City's woes, and are Manchester United on the rise again?

END_OF_DOCUMENT_TOKEN_TO_BE_REPLACED

Bridge was matched up with Made In Chelsea star Spencer Matthews and put on an incredibly entertaining charity fight after months of training.

Matthews was the wilder fighter over the three two-minute rounds while Bridge displayed some legitimately solid technique on his way to a unanimous decision victory.

Next up... it's Wayne Bridge v Spencer Matthews 🥊

Bridge's jab was the most impressive weapon in his arsenal and it repeatedly penetrated Matthews' guard but the ex-England international also forced two standing eight counts following a pair of furious flurries in the second and third rounds.

White-collar boxing bouts often lack technique which is understandable as it takes several years for boxers to hone their skills but Bridge's jab was singled out for particular praise.

Wayne bridge has got some jab on him 👊👊

Wayne Bridge is a decent boxer. That jab is lethal! #SportRelief #celebrityboxing

Wayne Bridge got a better Jab than some pros!

Wayne Bridge as a boxer....fair play. There are domestic champions who'd be envious of that jab. #SportRelief

Wayne Bridge actually has a better jab than Dillian Whyte.

After getting his hand raised, Bridge was humble in victory as he praised the other contestants who underwent dedicated training camps for a phenomenal cause.

"He was a lot better than I thought he was going to be," Bridge said of his opponent.

"I knew he was confident. Everyone knows he's a confident guy. I was quietly confident but nervous, I'm sure he was nervous as well.

"I take my hat off to all the other five people who got in this ring because it takes a lot of bravery.

"I take my hat off to anyone who boxes. It's one of the hardest things I've ever done. You can hit a bag but stepping in that ring is ten times harder.

"I'd like to thank my trainers - Sam, Charlie and Mark - and thank you to everyone who donated!"

popular
Here we go again - the government says book your Xmas party. What's 'Plan B'?
Gordon Ramsay's daughter Tilly calls out radio host for 'fat shaming' her live on air
Matt Lucas hits back at outrage over 'offensive' Bake Off German accent
Mum who drove into Insulate Britain in rage says 'I just gave them a nudge'
Watford staff unhappy with Ben Foster's commitment to vlogging on club time
FIFA to look at preventing teams from competing in consecutive World Cups
Passengers who allegedly filmed rape of woman on train unlikely to be charged
You may also like
Sport
Fighting Balotelli, losing Cantona's boots and the Goal GIF Challenge
Sport
How do footballers cope without the game after retirement?
Sport
Ben Stokes, manager call outs and dealing with lazy teammates
Sport
Wayne Bridge becomes the sixth footballer to sign up for I'm A Celeb
Sport
Jack Grealish donates £5k towards fundraiser for woman who died in Merseyside car accident
Next Page