Get over it, guys

Watford have filed an official complaint to the Premier League against Everton for their alleged misconduct earlier on in the season. Everton were in the process of replacing Ronald Koeman and their first choice was Marco Silva, who was Watford manager at the time. Watford dug their heels in and refused to let their man leave, but his head had been turned.

Everton ended up appointing Sam Allardyce, who seems set to leave imminently having achieved his target of keeping Everton up. Not the hardest job he's ever had. Watford, meanwhile, sacked Marco Silva soon after the saga, citing Everton's attempt to tap up the Portuguese manager as a contributing factor to disrupting their dressing room and leading to a significant dip in form.

Watford then hired Javi Gracia, who steered them to safety but will probably not last much longer, as is the Watford way. Sam Allardyce also looks set to leave Everton, having refused to sign a short term contract, safe in the knowledge that Everton would offer him an 18 month contract and sack him, handing Big Sam and nice, hefty pay-off.


This paves the way for Marco Silva to finally become Everton manager, which has angered Watford to such an extent that they've lodged an official complaint. 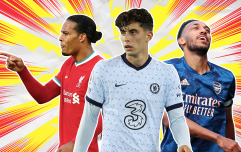 END_OF_DOCUMENT_TOKEN_TO_BE_REPLACED

Everton could face a potential points deduction if the Premier League come to the conclusion that their conduct during the saga warrants one.

Just to add to the complications, before he can become Everton boss, Silva still has a legal dispute to settle with Watford, who have reportedly accused the coach of a breach of contract.

You may also like
Sport
10 things that will definitely happen if James Rodríguez goes to Everton
Sport
Ronald Koeman wants to sign Everton defender for Barcelona
Sport
Speedo Mick: Walking Britain in his swimming trunks for charity
Sport
Liverpool, Everton and Curtis Jones' confidence
Football
What is 'Everton'? A series of questions, answered
Next Page