Mario Balotelli's career has been, shall we say, up and down. He has enjoyed spells of form that made people think he could become one of the world's best number 9s, and lulls that made people question how he reached the top level. 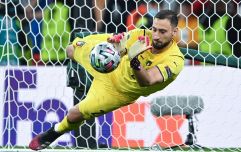 END_OF_DOCUMENT_TOKEN_TO_BE_REPLACED

His talent has never been in doubt, he just needs to be managed carefully. Lucien Favre struck a chord with Balotelli during their season together at OGC Nice and Favre was key to reviving Balotelli's career. Roberto Mancini also got a tune out of the striker during their time at Manchester City, where Mancini had to play both good cop and bad cop when managing the troublesome forward.

Mancini recently replaced Gian Piero Ventura as Italy manager after the Azzurri failed to qualify for the World Cup. For his first games in charge, Mancini recalled Balotelli, whose last start for the national side was against Uruguay in the 2014 World Cup. His last goal? Against England a few days prior.

It only took Balotelli 20 minutes to make his mark upon his return. A lofted pass forward from Leonardo Bonucci was headed into a dangerous pocket of space by a Saudi defender, before Balotelli picked it up, bought himself half a yard and lashed it home from 20 yards.

It's good to have you back, Mario.