He's a rock in defence, and by the looks of it, not bad in attack

It's easy to forget just how technically gifted some footballers are when you only watch them play competitive matches. Defenders especially, as they rarely get a chance during matches to demonstrate their skills without risking giving away a goal. 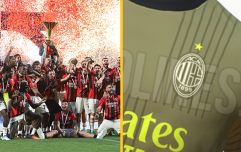 END_OF_DOCUMENT_TOKEN_TO_BE_REPLACED

It's during warm-ups that you clock just how good even the 'bad' players are at the top level, as well as in training sessions.

Thanks to the invention of social media, clubs can now share footage from their training sessions, as Crystal Palace did recently, with this video of an outrageous Wilfried Zaha volley.

Thankfully Napoli had the cameras rolling when Kalidou Koulibaly stepped up to practise his 1v1 dribbling and finishing. Now, we know Koulibaly is good with the ball at his feet, he has shown it time and time again in Serie A, but we didn't know he was capable of this.

As he starts dribbling at the defender, he is forced out wide, and with little space to operate in, he unleases an incredible, improvised finish with a left-footed rabona. The goalkeeper is left helpless as he's caught off guard and the shot floats past him.

Koulibaly is a man of many talents, and defending is simply one of them.