WATCH: Derby wonder goal trumps anything that happened in the Bernabeu on Tuesday night

As much as events in Dortmund and - more so - Madrid might dominate the headlines, we can safely say that nothing quite compares to the goal scored by Derby County's Mason Bennett in the Championship game with Wigan Athletic. 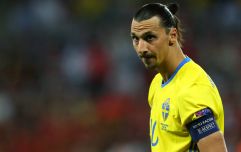 Zlatan Ibrahimovic recalled by Sweden, probably because he's a lion or God or something

END_OF_DOCUMENT_TOKEN_TO_BE_REPLACED

The Rams had fallen behind to Gavin Massey's first-half opener at Pride Park, and had to wait until the final half an hour of the game before drawing level. The equaliser, though, was worth the wait.

A ball played out wide to the left wing by Tom Huddlestone, Scott Malone sent a cross into the Wigan penalty area. The cross slightly behind Bennett, the 22-year-old turned and hooked an improvised volley beyond Jamie Jones in the Latics goal with his left foot.

It was an incredible finish; something you'd expect from Zlatan Ibrahimovic...

Having equalised, Frank Lampard's side then scored a winner through Malone with 12 minutes to go.

The 2-1 win leaves them seventh in the Championship, just outside the play-off positions. They return to action on Saturdat afternoon, when they host Sheffield Wednesday at Pride Park.

popular
Man United's tactical issues summed up in six screenshots
Brian Laundrie parents 'to cremate body with no funeral' amid mystery over cause of death
Sex expert reveals most common mistakes couples make in bed
A Netflix horror film is so terrifying people can't finish watching it
A definitive ranking of every swear word from worst to best
Man under house arrest begs to be sent to prison because he 'can't stand his wife'
Putin labels West 'monstrous' for teaching children they can change gender
You may also like
Sport
Zlatan Ibrahimović doubles down in LeBron James beef, saying athletes should 'stay out of politics'
Sport
LeBron James hits back at Zlatan Ibrahimović 'do what you're good at' comments
Sport
Zlatan Ibrahimovic aims dig at Romelu Lukaku as he posts anti-racism tweet
Sport
Zlatan Ibrahimovic tells teammates no racist words were used in Lukaku exchange
Sport
Furious Romelu Lukaku held back after clashing with Zlatan Ibrahimovic
Next Page