What an anticlimactic end to a potentially great brawl.

There was a lot of hype surrounding the welterweight clash between veteran fighters Jorge Masvidal and Jake Ellenberger on the TUF 24 Finale main card in the wee hours of Sunday morning. 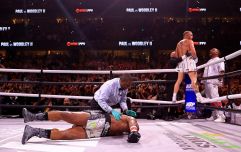 END_OF_DOCUMENT_TOKEN_TO_BE_REPLACED

Masvidal had been perpetually knocking on the door of the business end of the lightweight division earlier in his career and is looking to make run at the belt in his first stint in the UFC's welterweight division. After dropping back-to-back split decision losses to Benson Henderson and Lorenz Larkin respectively, 'Gamebred' got back in the win column against Ross Pearson before taking on the Juggernaut.

Ellenberger also came into this bout brimming with confidence following his career-saving knockout victory over Matt Brown at UFC 201. Prior to beating the Immortal, Ellenberger was 1-4 in his previous five contests and staring down the barrel of receiving his pink slip.

The fight began as expected with Masvidal outlanding his opponent with his high-volume striking style while Ellenberger was loading up his shots, trying to find home with that dangerous haymaker. This clash of styles gave this match-up FOTN potential, but instead it ended with the crowd booing the stoppage.

Masvidal almost had the fight finished in the early exchanges, but Ellenberger managed to weather the storm and get back into the fight. However, things went south for Ellenberger in the latter stages of the round when he whiffed a flying knee and got his toe stuck in the fence.

Everyone involved seemed bamboozled with what had transpired as Ellenberger stayed down clutching his foot in agony. Masvidal hesitated and began unloading some ground and pound when referee Herb Dean stepped in to call a time out. 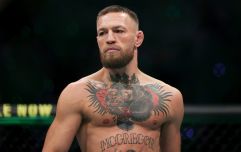 END_OF_DOCUMENT_TOKEN_TO_BE_REPLACED

Masvidal threw his arms in the air in celebration while Dean exited the cage to find out if the fight could somehow continue, but instead it was decided that the stoppage was final and Masvidal was awarded the TKO victory, despite the fact that Ellnberger was defending himself intelligently and was given barely any time to recover from the injured toe.

The crowd did not approve of the outcome as they let the world know by showering the Octagon with boos.