Absolutely magnificent from the England forward, but not enough.

Less carries, more tackles, fewer possession and playing most of the opening 40 minutes in their own half. And yet England went into the break leading 10-3.

END_OF_DOCUMENT_TOKEN_TO_BE_REPLACED

It looked as though England would remain on course for the Grand Slam, but Dan Biggar sprung from the bench to turn it all around for Wales.

The highlight of the half came when openside Tom Curry cantered through a gaping hole in the Welsh defence, 10 metres out, to put his side clear at the Principality Stadium.

Wales survived a rolling maul from the English just before the break before Gareth Davies dipped the ball out. As the hosts cleared the field, England captain Owen Farrell gathered his troops for an impromptu team-talk out on the pitch.

Former Wales captain Sam Warburton was in the broadcast box for BBC, along with Martyn Williams and Martin Johnson, and he gushed over Curry's opening 40 minutes.

"I know me and Martyn have been 7s in the past, but Tom Curry has been absolutely magnificent for England. Just his ball-carrying, his tackling, he's cleaning out rucks and his try, which was a really clever one.

"He's been absolutely everywhere and he has really epitomised the England performance. 17 tackles already. I mean that is almost unheard of for a half in international rugby. Tom Curry has been magnificent."

From a man that has waged many a war with the English, that is some compliment from Warburton. 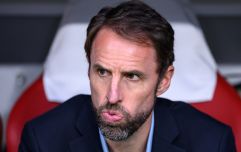 END_OF_DOCUMENT_TOKEN_TO_BE_REPLACED

Wales roared back into the game after the break and got to within a point of England.

Just as the home crowd sensed the game was there to be won, with an hour gone on the clock, Curry dipped in to secure his second turnover of the game as he latched onto the felled Hadleigh Parkes. Penalty England and Farrell lapped it over to make it 13-9.

At that point, though, Dan Biggar took over. Pressed into service for the finale, he teed up lock Cory Hill for the match-leading try.

Wales had their tails up and Biggar helped them clinch it with a cross-kick for Josh Adams, that he somehow caught, gathered and lunged for the try in one of THE great scores of this year's championship.

In the end, Curry could not even console himself with the man-of-the-match award. That went to the soaring, sublime Liam Williams.

"They got what they deserved, ultimately," Johnson admitted not long after the final whistle sounded.