There was a bit of a scary moment at the Austrian GP on Sunday.

Kimi Raikkonen and Fernando Alonso were involved in an alarming crash at the beginning of the race. 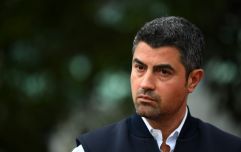 END_OF_DOCUMENT_TOKEN_TO_BE_REPLACED

The former Ferrari teammates collided during the opening lap with such force that Alonso's McLaren ended up on top on top of Raikkonen's car as both skidded off the track.

Both drivers emerged from the crash unscathed and were able to climb out of the wreckage. After a few laps of the safety car, the race resumed.

popular
Motorcyclist dies in crash live on TV while trying to escape police
The JOE Friday Pub Quiz: Week 278
Brit doctor visiting US killed by stray bullet while lying in bed
What Meat Loaf actually meant when he sang 'I won't do that'
AFTV regular 'Mr DT' releases statement after being given three-year jail sentence
'I resent my mum for not switching me back after baby mix up at hospital'
Son kills himself over guilt after fearing he may have given father covid, says mother
You may also like
Sport
Stewards reject both Mercedes protests following Verstappen title victory
Sport
Max Verstappen 'wants to stay with Red Bull for life' following F1 title win
Sport
Unacceptable: George Russell slams Max Verstappen F1 championship win
News
Lewis Hamilton facing protests from Grenfell survivors over car sponsorship deal
Sport
Lewis Hamilton disqualified from qualifying in Brazil Grand Prix
Next Page