They top Group 7 as a result.

Brazilian side Chapecoense, who lost 19 players and staff in a plane crash last November, have won their first ever Copa Libertadores match in Venezuela. 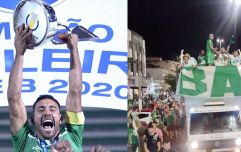 END_OF_DOCUMENT_TOKEN_TO_BE_REPLACED

Chapecoense beat Zulia 2-1 in the Venezuelan city of Maracaibo to mark their first win outside of Brazil since the tragedy close to the Colombian city of Medellin.

Of the 71 people who died, just three players who were on the plane that day survived - goalkeeper Jackson Follmann, defender Neto and winger Alan Ruschel.

Both Neto and Ruschel were included in the squad for Tuesday's game against Zulia. 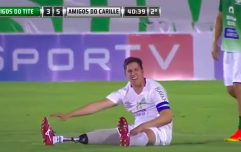 END_OF_DOCUMENT_TOKEN_TO_BE_REPLACED

Chapecoense were only promoted to Brazil's top flight in 2014, but caused a major upset when they qualified for last year's Copa Sudamericana final.

They were on the way to the first leg of that match when tragedy struck.

popular
People want ‘offensive’ Crown Paints advert banned after attracting hundreds of complaints
Incredible case of the only known individual whose parents were two different species
TikTokers are utterly convinced there is a secret zombie apocalypse going on in China right now
Jamie Foxx and Snoop Dogg's vampire movie surges to the top of Netflix charts
Darius Danesh opened up about his health struggles before his tragic death aged 41
Teacher's sex abuse sentence delayed after she gives birth
Cyclists may have to get number plates under radical shake-up of road laws
You may also like
Sport
Watch: Chapecoense plane crash survivor given Camp Nou ovation during friendly with Barcelona
News
Barcelona will play a friendly against Chapecoense this summer
Sport
Rival fans taunt Chapecoense with disgusting chant about plane crash that killed 71 people
Sport
Chapecoense survivor wakes from coma with no memory of plane crash
Sport
Chapecoense crash survivor will return to Brazil today
Next Page