Vasyl Lomachenko, the pound-for-pound best boxer in the world, joined Carl Frampton for an exclusive interview in the latest episode of TKO with 32 Red.

Lomachenko faces Luke Campbell at London's O2 Arena on Saturday night, with the Englishman the massive underdog in what will be Lomachenko's first fight in the UK since he was an amateur.


The unified lightweight world champion has lost just once in his professional career - to Orlando Salido in his second professional fight - and beat Campbell's compatriot Ant Crolla in his last bout in April of this year. He also won gold at the 2008 and 2012 Olympic Games. 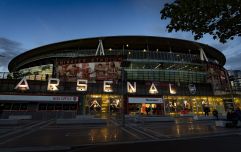 END_OF_DOCUMENT_TOKEN_TO_BE_REPLACED

Speaking to Frampton ahead of the fight, the Ukrainian discussed a number of topics, from how playing different sports has helped him have the 'fastest feet in boxing', to the death of his good friend Maxim Dadashev.

Check out the full episode of Lomachenko's exclusive interview above ahead of his fight.

You may also like
Sport
Hands on with FIFA 21, where the 'fundamentals of football' come first
Sport
Manchester City complete signing of Nathan Ake from Bournemouth
Sport
Arsenal offer Willian three-year contract with staggering signing on fee
Sport
England cricket team pull off incredible series of headers from balcony to bin during rain break
Entertainment
A must-watch documentary on Nicolas Anelka has just landed on Netflix
Next Page