"This testifies to their unprofessionalism."

Louis van Gaal has been speaking about Manchester United again. A few weeks ago, the Dutchman criticised his successor at Old Trafford, Jose Mourinho, for his treatment of Bastian Schweinsteiger, and a few weeks before that he urged Daley Blind to leave United.

END_OF_DOCUMENT_TOKEN_TO_BE_REPLACED

The former Red Devils boss is back again, and this time he has been speaking about the "unprofessionalism" of some his former players. Van Gaal was United manager for two years and, although his tenure was an improvement on David Moyes' brief reign of terror, his possession-based play didn't sit well with many fans of the club.

Other than a brief positive spell in the spring of 2015, when the team beat Tottenham, Liverpool and Manchester City with three excellent performances, the football produced under the Dutchman was largely forgettable, and his confrontational manner reportedly saw him get on the wrong side of some players.

It appears Louis wasn't particularly fond of some United either players either. During an interview with German publication Bild, the former Bayern Munich, Barcelona and Ajax coach was asked about a rumour from his time at United.

Van Gaal was said to have sent players emails with feedback on their performances and tactical instructions ahead of one-on-one meetings, and to have put trackers on the emails to see if the players had opened them.

“Yes, that’s true. I sent emails to the players, in which I pointed out, for example, their strengths and weaknesses," Van Gaal told Bild, confirming the story (translation via Sport Witness).

"I developed the digital tracker with my IT man. Each player was able to log in. So, I gave everyone the opportunity to prepare for the conversation with me at home and to meet me in dialogue at eye level.”

However, Van Gaal said the "unprofessional" United players tricked him and made it look as though they had read his emails.

"That’s true, too. But this testifies to their unprofessionalism and I have then addressed them. But I already did that with the emails at Bayern. My conviction is that a full professional also wants to live professionally, like Arjen Robben. He read the emails." 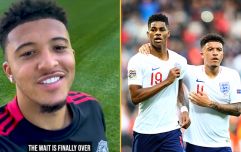 END_OF_DOCUMENT_TOKEN_TO_BE_REPLACED

Van Gaal also said in the interview that he tried to sign Robert Lewandowski, and United backed the move, but Bayern Munich wouldn't sell the Polish striker.

The Dutchman was sacked by United in rather ruthless fashion following the 2016 FA Cup final. The team won the game 2-1 against Crystal Palace, but almost immediately after the final whistle, Van Gaal found out he was going to be replaced by Jose Mourinho. He paid the price for not guiding United to the Champions League that season after they finished fifth, level on points with Manchester City, but with an inferior goal difference.

popular
Gary Neville points out the obvious about Digby, Lord Jones
A definitive ranking of every swear word from worst to best
Here's how to see who's been taking screenshots of your Instagram Stories
Mourad Aliev was not happy about being disqualified from the men's Olympic boxing
Protestors call on Dublin Temple Bar pub to "come out and say sorry" over alleged assault
Jamaica teammates produce hilariously frosty reaction to Thompson-Herah's 100m win
Sir Terry Pratchett’s daughter shuts down ‘horrifying’ idea that her father would've been transphobic
You may also like
Sport
Manchester United finally sign Sancho from Dortmund
Sport
Paul Pogba might leave Man Utd. No, *really* this time
Sport
Ander Herrera mocks Marcos Rojo for fire extinguisher incident
Sport
Man Utd inching closer to Raphael Varane agreement
Sport
Jose Mourinho admits he might have been 'too harsh' on Luke Shaw
Next Page