As well as being the fastest man to ever live, Usain Bolt proved that he can put one in the back of the onion bag, during a training session with Borussia Dortmund earlier today. 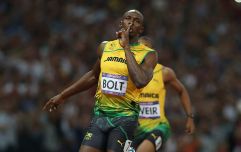 END_OF_DOCUMENT_TOKEN_TO_BE_REPLACED

The 31-year-old scored a header in front of more than 1,000 spectators. Although, as a man who has won eight Olympic gold medals in total, you can't imagine the moment of euphoria afterward was anything foreign to him.

He also nutmegged a BVB youngster, which you've got to think was pretty embarrassing for the lad.

You can watch the highlights of the training session here:

The training sessions come as he prepares to captain the World XI at Soccer Aid later this summer.