Tyson Fury has a terrific career in commentary waiting for him when he decides to hang his gloves up.

Perhaps he'll have to tidy up his language but Fury's honest take on Anthony Joshua's clash with Joseph Parker was hilarious, if nothing else. 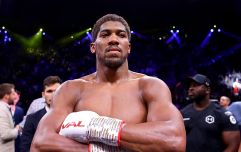 END_OF_DOCUMENT_TOKEN_TO_BE_REPLACED

Fury, who is set to make a return to the ring this summer, provided a running commentary on Saturday night's unification bout in Cardiff on his Instagram stories and it made for priceless viewing.

Joshua claimed a unanimous decision in a fight that never really got out of second gear and while he showed that he's more than a muscle-bound knockout artist in victory, he was criticised by some for a lack of aggression.

END_OF_DOCUMENT_TOKEN_TO_BE_REPLACED

In his post-fight interview, 'AJ' identified both Fury and WBC heavyweight champion Deontay Wilder as the only two fighters he is interested in facing next.

And it's safe to say that Fury is up for the challenge.

The controversial heavyweight has since deleted his Instagram stories from Saturday night but not before we managed to transcribe every word of his assessment.

Fury said: "Just watching these two and I'm telling you, they're a pair of wooden tops. They're not even good enough to be my sparring partners. They're a pair of bums. No panache, no flair, no show. Waste of money.

END_OF_DOCUMENT_TOKEN_TO_BE_REPLACED

"There's only one Tyson Fury for a reason. This is Mac year, 2018. They're a pack of bums. Parker is what Parker is, he's a young lad trying. 'AJ' is a wooden top. He ain't no superstar. I am the man.

"Again, another shit round. They're charging £20 a pop for this, this is a fucking joke. Hard-earned money, come on! There's no panache, no flair, no razzmatazz.

"I could beat 'AJ' in my comeback. Treble the jab up, swing the right hand up, downstairs and upstairs. He ain't good enough to be a sparring partner, a wooden top, bum city, piece of shit.

"We're in round 11 and we're still waiting for the fight to catch fire. Come on, boys. Get to it! Get stuck in! Look at this referee. Where have you found him? He needs sacking!

"That was a load of shit. Anthony Joshua is a bum! He's a wooden top. I'll jab his nut in and knock him spark out. The referee needs sacking. Joseph Parker settled for a loss. It was a shit fight.

"That was a shit fight and a shit performance from both fighters. Listen, 'AJ', please don't fight Wilder because he'll knock you spark out and take my £50 million."