World heavyweight champion Tyson Fury has publicly spoken in detail of his bipolar and suicidal thoughts.

The Manchester boxer, who this week used Twitter to retire and then un-retire in the space of three hours, was recently ruled out of a rematch with Ukraine's Wladimir Klitschko on unspecified medical grounds.

And, for the first time, he has admitted his struggles with mental illness contributed to him postponing his rematch with the 40-year-old.

"To be honest yes," Fury said, when asked by Rolling Stone whether the postponements were down to him not training since May due to depression.

"I've not been in the gym for months. I've been AWOL. I've been out drinking, anything to get me mind off what's been going on to me."

In a detailed interview with the magazine, Fury has opened up not just about his depression, but also about his drug use (reportedly tested positive for a Class A drug, though will not lose his WBA, WBO, IBO, Ring and lineal heavyweight belts as a consequence) and the discrimination suffered throughout his life as part of the Traveller community.

"I'm in a hospital at the moment," Fury says.

"I'm seeing psychiatrists. Everything. They say I've got a version of bipolar. I'm a manic depressive.

"I've not been in a gym for months. I've not been training. I've been going through depression. I just don't want to live anymore, if you know what I’m saying.

"I've had total enough of it. They've forced me to the breaking edge. Never mind cocaine. I just didn't care. I don't want to live anymore. So cocaine is a little minor thing compared to not wanting to live anymore.

"I am seeing help, but they can't do nothing for me. What I've got is incurable. I don't want to live. All the money in the world, fame and glory, means nothing if you're not happy. And I ain't happy. I'm very far from it." 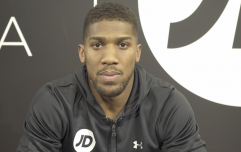 END_OF_DOCUMENT_TOKEN_TO_BE_REPLACED

Fury explains how his mental state has worsened since he beat Klitschko to become world champion last year, attracting unwanted attention from the media and his peers.

He tells Rolling Stone about discrimination suffered by virtue of belonging to the Traveller community, and says he has had suicidal thoughts which persist to this day.

"And that's a bad thing to say when I've got three children and a lovely wife isn't it? But I don't want to live anymore.

"And if I could take me own life – and I wasn't a Christian – I'd take it in a second. I just hope someone kills me before I kill me self. I'll have to spend eternity in hell.

Fury has repeatedly pledged to return to the ring when he is fully recovered, while uncle and trainer Peter has leapt to his defence.

If you ever need to talk about your mental health, here's a list of the resources available to all of us.

You may also like
Entertainment
Can a WWE wrestler and boxing champion learn from each other?
Sport
Despite appearances, Joe Frazier hated Muhammad Ali until the very end
Sport
Carl Frampton reveals his X Factor audition during training camp
News
Former boxer Nigel Travis on surviving the Bishopsgate bombing
Sport
Tyson Fury's cut against Otto Wallin a wake up call ahead of Wilder rematch
Next Page