In his post-fight press conference at a rain-drenched Windsor Park on Saturday night, Tyson Fury repeated that he is not concerned with banking as much money as possible.

"I'll go to Las Vegas for free and fight Deontay Wilder because I'd rather have no money and win the title than have £200 billion and lose," Fury said.

Fury is at a point in his career where he is hoping to cement his legacy as one of the greatest heavyweights of all time and he can take a huge stride in that direction if he adds the WBC title to his collection.

There are not many figures in boxing more controversial than Fury, a fact which the undefeated Brit readily admits, but there is another side to Fury, a side which has seen him become an unlikely hero for people struggling with mental health issues.

Fury does not shy away from discussing his problems with mental health and he has admitted that he'd contemplated taking his own life when times were at their toughest.

"I'm sat here in a great frame of mind and that's worth more than any money could buy because at one stage, I thought I was going to end up in a padded room, never mind boxing.


"I didn't think I was going to survive. I was on the verge of committing suicide." 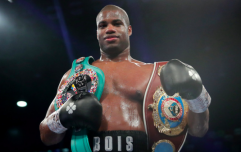 END_OF_DOCUMENT_TOKEN_TO_BE_REPLACED

The week leading up to Fury's unanimous decision victory over Francesco Pianeta, which secured him the Wilder fight, has been peppered with lovely stories of exchanges with people who are not in a great place.

After a lengthy chat with a group of homeless volunteers on Tuesday night, the 30-year-old reportedly spent 20 minutes the next day speaking to a man who was experiencing suicidal thoughts and had requested a private conversation with Fury.

And while Fury has several years left in him as a professional boxer now that his comeback journey is complete, he is looking at an admirable change of career once he hangs up his gloves.

"I'm doing this for all the people who do suffer with things," Fury said.

"The week that I've been here, I've been speaking to people with mental health problems on a daily basis and I do take pride in that.

"Hopefully after boxing, I become a therapist or something. I do want to help people like that.

"It's something I think I might be good at because, as you can tell, I'm shit at talking."

You may also like
Sport
Anthony Joshua and Tyson Fury agree two-fight deal, confirms Eddie Hearn
Sport
This is Tyson Fury's Guide to Self-Belief
Entertainment
Anthony Joshua breaks down his favourite boxing movies
Entertainment
Can a WWE wrestler and boxing champion learn from each other?
Sport
Despite appearances, Joe Frazier hated Muhammad Ali until the very end
Next Page