Tyson Fury has unveiled a new Christmas t-shirt that takes a swipe at Anthony Joshua and promoter Eddie Hearn.

END_OF_DOCUMENT_TOKEN_TO_BE_REPLACED

Joshua's recent victory over Kubrat Pulev paved the way for a 2021 clash with Fury, which would bring the two biggest names in heavyweight boxing together for the first time in a professional ring.

Fury and Joshua once sparred with one another at Finchley Boxing Club while the latter was still an amateur.

After dispatching with Pulev, Joshua was asked whether he'd like to face off against Fury.

AJ did not respond with an affirmative 'yes', but said he was prepared to face whoever had the belts.

@anthonyfjoshua sounds ready... will we get an undisputed heavyweight world champ from the U.K in 2021?👑🇬🇧🙌 pic.twitter.com/O5ovNvK3cy

"It's not about the opponent, it's about the legacy and the belt," Joshua said.

"Whoever has got the belt, I'd love to compete with them. If that is Tyson Fury, let it be Tyson Fury. It's no big deal."

Fury responded almost immediately with a video posted to his social media channels. 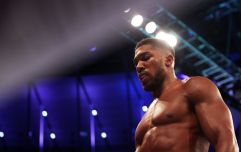 END_OF_DOCUMENT_TOKEN_TO_BE_REPLACED

"There you go everyone, Anthony Joshua just s**t himself live on television. He got asked did he want the fight, and he went around the bushes and put his arse on the edge.

Fury has now gone one further in his taunting of AJ. A photo posted to his Instagram story shows Fury wearing a new Christmas t-shirt depicting caricatures of Joshua and promoter Eddie Hearn, complete with the slogan 'You Big Dossers!"

He said: "It makes me laugh when people look at AJ's resumé. Maybe I'm seeing something other people don't?

Hearn then took a swipe at Fury's previous opponents.

"These are consecutive fights. You don't see Tom Schwarz, Otto Wallin, Sefer Serferi. Who is the other geezer? I can't even remember his name, the Italian bloke? And then Agit Kabayel.

"I mean it's laughable when you compare the two resumés, but it's in black and white for everyone to see."

When asked for his response by JOE, Fury said he would not comment as he does not watch the news and does not entertain such negativity.

"Everyone on social media is living this fantastic, glamorous life on a white, sandy beach. That’s not reality."@Tyson_Fury explains why he stopped watching the news and spending so much time on social media. pic.twitter.com/8XOsJ60tDF

"After I finished watching it for 30 minutes, I'd be all down and depressed and I didn't want to do anything. Avoid watching negative stuff."