We haven't fully checked, but we'd hazard a guess that there aren't too many top-level footballers called Zimmerman.

So for two players with that surname to score crucial goals in the same weekend is quite the coincidence in its own right, but it doesn't end there.

FC Dallas defender Walker Zimmerman scored this header to take his team into extra time in the MLS Conference Semifinals.

And his namesake Catherine went even better, firing home this thunderbolt for Providence College in the Big East women's soccer semifinals.

Zimmerman with a goal from WAAAAAAY downtown puts @PC_WomensSoccer on top 1-0 in the #BIGEASTwsoc semifinals https://t.co/evVf5PAoOW

If that wasn't enough, both teams were level after extra-time in their respective matches, and both went on to win 4-2 on penalties with both Zimmermans finding the net.

Walker's spot-kick was among the most emphatic winners we've seen. 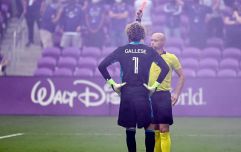 END_OF_DOCUMENT_TOKEN_TO_BE_REPLACED

It brings back memories of Brian McDermott's time in charge of Leeds United, when his opposite number with the Leeds Rhinos rugby league team had the same name and both managers had a 25-year-old winger by the name of Ryan Hall in their ranks.

Dallas will hope the similarities end there, though - Providence lost their final against Butler, and Dallas go into the Western Conference final against the Portland Timbers needing to keep their run going.