#AskWarren inspires some perfectly understandable questions about the Lions

The #AllForOne hashtag is clearly not working... 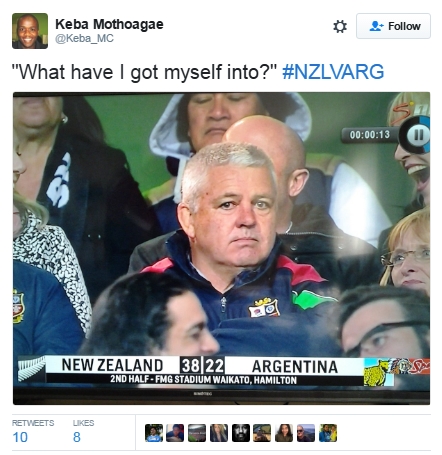 END_OF_DOCUMENT_TOKEN_TO_BE_REPLACED

Former British & Irish Lions captains Brian O'Driscoll and Gavin Hastings have called on players and fans to put their nationalities to one side and get behind Warren Gatland's men.

Noble sentiments from an Irishman and a Scot but some resentment remains after Gatland's April 19 naming of a 41-man squad.

Fans from all four nations have a few questions to ask of the Lions coach but Scottish supporters seem particularly aggrieved with the squad selection.

Gatland recently took part in a Twitter Q&A with Lions sponsors Standard Life and fans were encouraged to send questions along with the #AskWarren hashtag.

Two questions kept cropping up, and cropping up again. We wonder what Gatland will make of it all...

Why so many Welsh?

I really wanted him to be wearing these... pic.twitter.com/7PQ1DrzM5j

Did you wear red tinted glasses whilst watching the 6 nations? Will warrenball work against such talented opposition?

Why so many Welsh players when they finished 5th in 6 Nations and why so few Scots??

Of course, it's not all bad vibes.

#AskWarren Any chance of a ticket for the 2nd and 3rd tests after I've been badly let down? #dreamtripprayforticket #AllForOne @SLI_Global