"I'm here to give the players a kick up the arse and win games."

Tony Adams and his extraordinary suit have arrived in Spain, where the former Arsenal captain has been named interim manager at La Liga strugglers Granada. 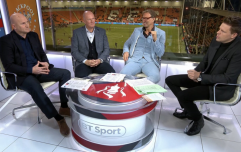 END_OF_DOCUMENT_TOKEN_TO_BE_REPLACED

Granada are in 19th place, seven points from safety and will need something miraculous to occur if they're to stay up, starting with Adams' first game in charge at home to Celta Vigo on Sunday night.

The 50-year-old's last managerial role was with Azerbaijani club Gabala FC back in 2011, before that he managed Wycombe Wanderers and had a brief stint as Portsmouth boss in 2008. 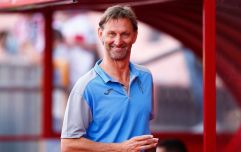 Tony Adams has found his next job, in Rugby League

END_OF_DOCUMENT_TOKEN_TO_BE_REPLACED

His appointment at Granada until the end of the season raised eyebrows, but it's not as surprising as it first seemed.

The former England captain is friends with the club's Chinese owner, and vice-president of his DDMC Football Club Management Company.

Pop the sunglasses on before you have a butchers at this https://t.co/Cc6ioYAntc 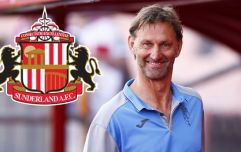 Tony Adams could be about to become Sunderland manager

END_OF_DOCUMENT_TOKEN_TO_BE_REPLACED

Adams has promised to give his players a "kick up the arse", and appears to have arrived in Spain from the English First Division circa 1987.

This wasn't the British invasion of Spain some Tories had in mind last week, but Adams is ready to show the continentals what the Brits are made of and has brought reinforcements.

The new Granada boss has Kieran Richardson and Nigel-Reo Coker on trial - there's a sentence you weren't expecting to read today.

This morning, Kieran Richardson & Nigel Reo-Coker joined the first team squad for training, during a trial period with the club.

Richardson has been without a club since leaving MLS franchise Montreal Impact at the end of December. The 32-year-old winger played for Manchester United between 2002 and 2007, and was part of the Aston Villa side relegated from the Premier League last season.

He also has eight caps for England.

Reo-Coker has been without a club since January 2016, when he left MLS franchise Montreal Impact.

The 32-year-old former West Ham captain last played in England back in 2013, when a short spell with Ipswich Town ended.

Hopefully, Adams' eye for a player is better than his eye for a suit.

popular
Brit on holiday beaten with a brick by gang before being thrown in the sea unconscious
Premier League player arrested on suspicion of rape facing two more allegations
Men with ‘very large penises’ wanted for new documentary
Dad who ran off with Ukrainian refugee says couple are doing 'brilliantly' - but he can't see his kids
Teens are turning up to watch Minions in suits - and why cinemas have been forced to ban them
Threesome sees 60-person brawl break out on cruise ship, says passenger
British schoolboy breaks internet after attending prom in sequined tuxedo ballgown
You may also like
Sport
Tony Adams launches some personal insults towards Arsene Wenger in an interview
Sport
Tony Adams' reaction to relegation shows he's a manager that might be able to coach himself out of a paper bag
Sport
Real Madrid players caught taking the piss out of Tony Adams on the sideline
Sport
Tony Adams' peculiar tactical switch made no difference as Real Madrid hammered Granada
Sport
Tony Adams' memory momentarily abandons him after worst possible start to life in La Liga
Next Page