The before and after pictures are quite something.

Dimitar Berbatov scored twice for the Rest of the World in their 3-2 defeat to England during the annual Soccer Aid clash at Old Trafford on Sunday, but his goalscoring exploits weren't the main topic of conversation.

END_OF_DOCUMENT_TOKEN_TO_BE_REPLACED

The former Manchester United striker linked up brilliantly with the legendary Ronaldinho, who spent most of his night ripping the piss out of his celebrity opponents.

And while everyone was talking about Mark Wright's impressive free kick skills and Sam Allardyce's physical affection for Niall Horan, a lot of the chatter about the charity event centred on Berbatov's new-look hair.

Even before he left the Premier League, the flowing black locks the Bulgarian once sported at Spurs and Manchester United were diminishing fast.

This was Berba at Monaco just last year... 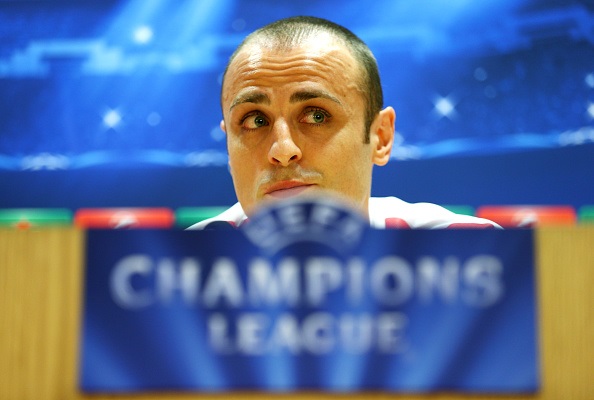 At Old Trafford on Sunday, he turned up looking newly endowed with a rich head of hair.

Many watching couldn't help but be impressed, while others were quick to point out that Wayne Rooney could probably do with getting some contact details off his former teammate.

Wayne Rooney needs to get onto Berbatov's hair guy. That's not budging, that 👌🏻

Berbatov sporting a full head of hair these days I see. Rooney should ask him who did his hair transplant. #SoccerAid2016

Berbatov's hair-line must be up there with Liverpool in Instanbul for great comebacks!

To donate £5 to Soccer Aid, text GIVE to 70750 or visit itv.com/socceraid for more information.

popular
The JOE Friday Pub Quiz: Week 261
Grimes says baby X Æ A-XII calls her by first name as she doesn't identify with 'mum'
A definitive ranking of every swear word from worst to best
Missing Instagrammer Gabby Petito's last text suggests 'she may have been 800 miles from last sighting'
Shipwrecked mum found dead saved her children by breastfeeding them at sea
'Gleeking' is the 'disgusting' bodily function that most people don't know they can do
Man eats ‘world's biggest burger’ in front of vegan protestors
You may also like
Sport
Michael Owen claims PSG are a weaker team because of Lionel Messi
News
Reece James has Champions League winners' medal stolen during robbery
Sport
Barcelona board held midnight meeting with Ronald Koeman after Bayern defeat
Sport
England move above France to third in FIFA world rankings
Sport
Mohamed Salah goes above and beyond with 3am recovery session after AC Milan win
Next Page