England could be without some key players in the Six Nations if Toulon president Mourad Boudjellal has his way.

The controversial head of the European champions has come up with a plan to squeeze the French club's postponed Champions Cup tie against Bath into a congested fixture schedule, but it's unlikely to go down well in the headquarters of the England and France unions. 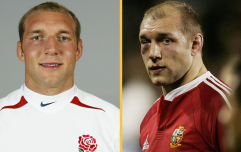 END_OF_DOCUMENT_TOKEN_TO_BE_REPLACED

The Pool 5 game was one of five European fixtures called off last weekend in the wake of the shocking terrorist attacks in Paris, but now organisers EPCR are struggling to find new dates for the games in a crowded post-World Cup rugby calendar.

Bath owner Bruce Craig insisted that there was no way his club could find a way to fit the extra game in, and was criticised for "opportunistically" demanding that the match-day points be shared, despite the fact Toulon would be strong favourites for the game.

While Boudjellal agreed that a midweek fixture was not an option, he did offer to play the game during the Six Nations - provided both clubs were free to select their international players.

Or move Christmas and play on the 25th

"Playing on Wednesday isn't possible," Boudjellal told L'Equipe. "I can only see one solution... It would mean that the [national team] coaches would have to accept not being able to call up international players of Bath or Toulon in order for us to be able to play the match during a matchday of the Six Nations."

Relationships between clubs and the unions in France and England have long been tense, so the RFU and FFR are hardly going to jump at the prospect of losing the likes of George Ford, Anthony Watson and Mathieu Bastereaud for a key Six Nations fixture.