Can you name Tottenham Hotspur's starting XI for their Premier League opener 10 years ago?

In the first round of the 2008/09 Premier League campaign, Tottenham Hotspur lost 2-1 away to Middlesbrough. The Egyptian ended up scoring the decisive goal against his former club. 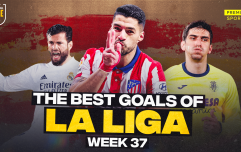 END_OF_DOCUMENT_TOKEN_TO_BE_REPLACED

We're asking you to name the 11 players that started for Spurs in that match at the Riverside on August 16, 2008. You have five minutes to complete the quiz. Surnames will be accepted as full answers.

Best of luck and let us know how you get on. If you spoil it for everyone else, may VAR ruin every single match you'll ever look forward to from here on out.