Fernando Torres is up and running in Japan

The former Liverpool and Chelsea striker left boyhood club Atletico Madrid in the summer to sign for J-League side, Sagan Tosu. Having failed to score in his first six appearances for his new club, Torres finally managed his first goal for them in their Emperor's Cup game against Andres Iniesta's Vissel Kobe. 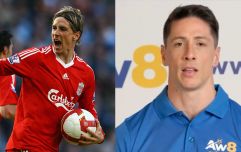 Fernando Torres has got absolutely jacked since retiring from football

END_OF_DOCUMENT_TOKEN_TO_BE_REPLACED

His team already leading through an own goal after half an hour and Kazuki Anzai's second-half strike, Torres added a third in the 84th minute to seal victory. The ball laid off to him inside the area, the 34-year-old calmly steers the ball in off the far post with his right instep.

Iniesta, Torres' former teammate in the Spanish national side was unable to inspire his side to victory in the game after recently scoring his first goals since leaving Barcelona at the end of last season.

After the game, Torres shared a picture of the pair together on his Instagram page, noting how they had played in the same Spanish junior side as 15 years old.

'Football leaves you these good moments,' he wrote. 'We started playing together at 15 years old in the national team. We have shared some of the best moments in our careers and today we return to see each other in Japan.

'Always a pleasure to see you my friend @andresiniesta8' 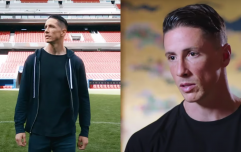 END_OF_DOCUMENT_TOKEN_TO_BE_REPLACED

Despite their victory in the cup, Sagan Tosu remain in the relegation zone with 11 games of the J-League season still to play. Iniesta's side are currently fourth, 13 points adrift of league leaders Sanfrecce.

Prior to finalising his move to Japan, Torres is thought to have had offers from clubs in Major League Soccer as well as from Newcastle United and Rangers, where former Liverpool teammate Steven Gerrard is now manager.

popular
Graham Norton accidentally posts Garfield and Maguire in No Way Home poster in now-deleted Tweet
Man with world’s biggest penis says Oscar winner slid into his DMs
Best man horrified after catching friend’s wife cheating with bartender
YouTuber posts video telling fans 'I'm not dead' - dies days later
Senegal boss calls out Jurgen Klopp over AFCON comments
A definitive ranking of every swear word from worst to best
'I pooed myself on my date's floor - he kicked it thinking it was mud'
You may also like
Sport
David Villa to join Fernando Torres and Andres Iniesta in Japan as NYCFC exit looms
Sport
WATCH: Fernando Torres goal saves Sagan Tosu from relegation
Sport
Alexis Sanchez reminds Jamie Carragher of Fernando Torres for all the wrong reasons
Sport
Fernando Torres has confirmed which club he will play for next
Sport
Fernando Torres' next club has been accidentally leaked
Next Page