Not for the first time in his short career, Kieran Tierney is being linked with a move to England

The 21-year-old Celtic defender has impressed since making his debut for the Glasgow club three years ago and has established himself as a regular in the Scottish national side. 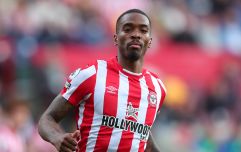 END_OF_DOCUMENT_TOKEN_TO_BE_REPLACED

Manchester United have previously been linked with a move for him, with Luke Shaw failing to convince anyone he's a long-term fit for the left-back position at Old Trafford.

However, with United reportedly choosing not to prioritise a new left-sided full-back this summer, it's now emerged that Everton are poised to make a bid to take Tierney to Goodison Park.

Newly appointed manager Marco Silva and director of football Marcel Brands have identified Tierney as one of the club's main targets this summer, The Telegraph reports, and view him as a long-term successor to Leighton Baines. His versatility is also thought to have impressed Silva, having previously operated at right-back and in central defence for the Scottish champions.

END_OF_DOCUMENT_TOKEN_TO_BE_REPLACED

The same report claims Everton are preparing a bid of around £25m for Tierney, who has been voted as the Scottish Young Player of the Year for the last three years on the trot.

The report points out that Everton's squad last season contained too many players past their prime, a factor which contributed to a disappointing season under Ronaldo Koeman and Sam Aallardyce. In Tierney they would be landing an exciting young player with his better years very much ahead of him.

Wayne Rooney confirmed his departure from Goodison for a second time earlier this week, sealing his switch to D.C United in Major League Soccer a year after returning to his boyhood club from Manchester United. It's expected Rooney will not be the only player to depart the club this summer as Silva looks to rebuild his newly inherited squad.