This is how burritos inspired Nate Diaz to take up MMA

Victory over Conor McGregor has instantly propelled Nate Diaz into the mainstream.

The second-round submission came against the odds, but it made people sit up and take notice of the Stockton native.

But his life, and that of brother Nick, could have taken a very different path if they hadn't been given a tasty incentive to take up jiu-jitsu in their youth.

Nate has a potential title shot awaiting him, and it's all down to burritos.

An interview with MMAFighting from back in 2012 has resurfaced in the light of the stunning UFC 196 victory, and it tells the story of how the young, starving brothers used martial arts as a way to get regular hot meals. 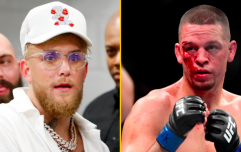 END_OF_DOCUMENT_TOKEN_TO_BE_REPLACED

"I didn’t have any money. At home we didn't have sh*t. I was starving all day," Nate explained.

"I was going for burritos and dinner, and hey, I wanted dinner every day. Before I knew it I was a blue belt."