Not a bad call from Peter Butler.

JOE has been contacted by a friend of an eager amateur pundit, who claims to have predicted Leicester's (potential) title win all the way back in February of last year. 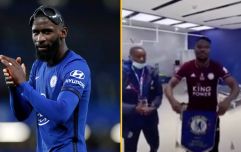 END_OF_DOCUMENT_TOKEN_TO_BE_REPLACED

Peter Butler's friends have been retweeting and reposting a status from the football fan, which appears to be from February 2015.

In the Facebook status, Peter says Leicester's momentum in the charge to avoid relegation in the 2014/15 season could carry them through to a title win in the 2015/16 season.

The status was brought to our attention by Concobhar Braonáin – a friend of Peter's – but when we looked back through Peter's timeline, we couldn't find a trace of the status update from last year.

We asked Concobhar to ask Peter what happened to the status. He claims to have accidentally deleted the status while trying to turn off notifications – because he was fed up of his phone buzzing from people sharing the status.

So from the screenshots, it does seem legit.

Congratulations, Pete. Any tips for next year?

Got a story for JOE? Send us a message on our Facebook page.