There have been some great soothsayers in history. 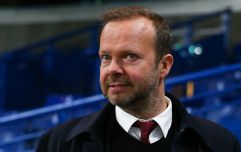 END_OF_DOCUMENT_TOKEN_TO_BE_REPLACED

But is Neil Boland the greatest of them all? A Tweet from almost three years ago from the man who's Twitter bio reads simply "meh" has resurfaced today - after his spookily accurate prediction came to pass.

Back in 2013 David Moyes was Manchester United manager. And in a bleak season for the reigning champions there was one ray of hope: Moysey had plucked Adnan Januzaj from academy obscurity and on his first start for the club he bagged two goals as United came from behind to beat Sunderland 2-1.

The club, fearful of losing their new prospect for a small compensation fee, responded by handing the youngster a five year contract.

So HOW DID HE KNOW? It's a mystery.

And now people are asking The Great Boland for some more insights.

Some people are a little unsettled by his skills:

But what will become of United's newest signing, Neil?

@IndigoLFC say something about Pogba.

Some are perhaps taking things a little too far:

@Goonerette_7 should I seek happiness with a new love or should I stick with my wife?

Aaaaand there it is:

@CelticLad1967 Got the lottery numbers 👌