It takes a lot to beat your fiercest rivals and still end the weekend worse off than you started it, but Seattle Sounders fans have found a way.

If their Rick Astley-inspired tifo wasn't bad enough, footage has emerged of a chant from a few years back which makes us have second thoughts about whether organised sport as a concept should even exist.

END_OF_DOCUMENT_TOKEN_TO_BE_REPLACED

Before you have the phrases 'fight and win' and 'come on Seattle' etched on your brain forever, we'll give you fair warning that you don't have to watch this, but we've piqued your interest.

Let's start out with the fact that this guy has brought a microphone to a football match.

We're just going to let that sink in. 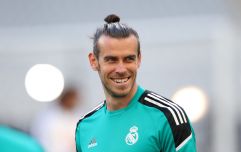 Gareth Bale set to join MLS side on a free transfer

END_OF_DOCUMENT_TOKEN_TO_BE_REPLACED

You'd have thought so, yeah. Maybe they tried.

Yeah, you're right, they probably knew this was one he'd have to work out for himself.

No, we don't know either. If anything they're worse than him for encouraging it.

Definitely not regulation. We'd have said boy scouts but the voice sounds too low.

Not sure why. Maybe it's a timing thing.

Well yeah, technically, but we're not sure that's the reason why they won.

God, I hope not. Once was enough.