There's something disturbing about this photo of Barnsley's Adam Davies

Barnsley can't be accused of spending as much resource as possible to keep their players on board.

The Yorkshire club are currently eighth in the Championship, thanks in part to the performances of young goalkeeper Adam Davies. 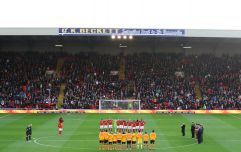 END_OF_DOCUMENT_TOKEN_TO_BE_REPLACED

The 24-year-old has kept 10 clean sheets in league and cup this season as the newly-promoted side have cemented their place in the second tier and flirted with the play-off places, and he has been rewarded with a new deal.

But there's something a little off with the photo used by the club to announce the deal. Can you spot it?

No? Well, journalist Evan Bartlett figured it out, and shared his amazement with the general public. 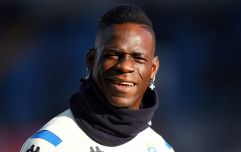 END_OF_DOCUMENT_TOKEN_TO_BE_REPLACED

Five biscuits, arranged on the corner of the table. Sans crockery. Won't someone think of the hygiene? Not to mention the reckless ignorance of the serious problem of crumb clearup.

Well, we say 'arranged'. There's almost a flourish to it, but it's spoiled by the one nearest to Davies, lying flat while the other four are stacked against each other.

How did this come about? Were the biccies originally laid out like dominoes, and toppled by the goalkeeper moments before the photo was taken?

Actually, we don't want to rule out the possibility that 'Reds director Barry Taylor', if that is his real name, is the man responsible.

Still, if Barnsley used more of their income on plates rather than wages for their players, perhaps they wouldn't be as high up in the league as they are. That's just the way the cookie crumbles.

popular
Scotland international rugby star Siobhan Cattigan dies aged 26
Woman wins millions after suing mum's GP for allowing her to be born
A definitive ranking of every swear word from worst to best
Elon Musk shares 'evidence' we are actually living in a simulation
Nasa warns 'concerning' asteroid will break into Earth's orbit in a week
There's a petition to stop interviewing Will and Jada Smith so we can all be 'free'
Here's how to see who's been taking screenshots of your Instagram Stories
You may also like
Life
Woman spends £13.7k to rescue stray kittens she found on holiday
Sport
Daydream Believers: The football club that lifted a town at its lowest ebb and inspired a new film
Football
Watch VAR overrule Burnley penalty just as Vydra runs up to the ball
Life
On The Ball: The grassroots movement for free sanitary products at football grounds
Sport
Here's why Barnsley put a stack of al fresco biscuits in that Adam Davies photo
Next Page