Peter O'Mahony is the captain. What an honour but, my, how it's deserved.

Warren Gatland's men take on the All Blacks on Saturday morning (8.35am UK time) and the Lions starting team has been named.

"We've picked a team that we think our capable of going and playing some exciting rugby," Gatland said.

"There's a nice blend and balance and Peter at captain - he captained the side against the Maoris and did a good job."

As suspected, Sam Warburton doesn't make the 15 but he is named as a sub.

A couple of big surprises include Leigh Halfpenny being dropped for Liam Williams whilst Maro Itoje has also been overlooked for a starting place in favour of Alun Wyn Jones.

The 23 Lions to face @AllBlacks at Eden Park are... 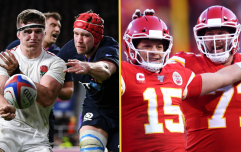