They call it the richest game in football, and it is Huddersfield Town who will be swimming in pools of gold doubloons this summer after securing their club's financial future for years to come.

The mascots, valued at roughly £1.2m a piece, accompanied the Terriers and Reading out onto the field before being sent back to their homes, before the handshakes and coin toss – worth £10m and £25m respectively – went according to plan.

Money was in the air throughout a tense and cagey affair, but the crowd of just over 76,000 - each member of which represented more than £2,200 of the prize on offer - remained supportive.

Like scheduled parachute payments entering their third and final year, Huddersfield were deflated early on, after Izzy Brown missed a near-open goal at the far post.


The weight of the occasion pressed heavily - much like bags of legal tender currency - on the shoulders of the players throughout and it was no surprise that the 120 minutes elapsed without a goal. 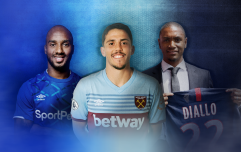 Ten under the radar transfers you might have missed this summer

END_OF_DOCUMENT_TOKEN_TO_BE_REPLACED

A penalty shootout, the most financially valuable in football in case you weren't aware, finally saw some goal action and David Wagner's side sealed victory thanks to some expert goalkeeping from Danny Ward.

With promotion secured and the Huddersfield party started, 170 million pound coins dropped onto the pitch, blinding all of those unfortunate enough to have glanced upwards at the time.

For those lucky souls who retained the use of their eyes, their prize is Premier League football and even more money next season.


popular
QUIZ: Identify which European clubs these 20 badges belong to
THE JOE FRIDAY PUB QUIZ: WEEK 174
QUIZ: Which footballer has the higher FIFA rating?
THE JOE FRIDAY PUB QUIZ: WEEK 173
Tickets for UFC London are about to go on sale
QUIZ: How well do you remember the football that happened in 2019?
Liverpool winning the league or: how I learned to stop worrying and love the bomb