Southampton FC assistant first team manager Eric Black is the latest high profile football figure to be named by the Daily Telegraph in their football investigation.

The paper claims Black attended a meeting with agent Scott McGarvey and an undercover reporter earlier this month at a Hampshire hotel, where he was recorded on secret camera allegedly discussing payments to club officials. 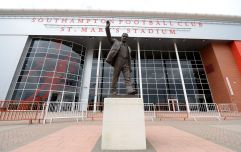 END_OF_DOCUMENT_TOKEN_TO_BE_REPLACED

On Thursday night a spokesman for Mr Black told the Telegraph: “[Mr Black] does not recall Mr McGarvey making suggestions that football officials should be paid during transfer negotiations – this was not the purpose of the meeting so far as our client understood it. Any suggestion that he was complicit in such discussions is false.”

Southampton had earlier pre-empted the publication of the story by revealing they had been contacted by the paper about Black, but said the Telegraph at the time refused to share details of the allegations with the club.

'Southampton Football Club has today been made aware by The Daily Telegraph that, as part of their on-going investigation, the club's Assistant First Team Manager Eric Black will feature as part of an article in tomorrow's paper.

'The club immediately requested to be sent, by The Daily Telegraph, the details of this article, but the newspaper declined to share any further information.

'We have today contacted The FA and The Premier League, and intend to work closely with both bodies on this matter when the facts become clear.

'Southampton Football Club is fully committed to investigating any situation that directly or indirectly relates to our club, employees or the wider community.'

Advertisement
The Telegraph then confirmed Black was the subject of their latest story:

It is the latest twist in a scandal that has rocked football.

The paper conducted a ten month long sting into the workings of the game at the top level and has been publishing their claims all week.

And on Thursday Barnsley sacked assistant manager Tommy Wright after he was filmed allegedly accepting a £5,000 cash payment from a reporter posing as the representative of a fictitious far eastern company looking to invest in football.

As well as Allardyce and Barnsley coach Wright, the investigation has also named QPR boss Jimmy Floyd Hasselbaink. The club responded by launching an internal investigation, but Hasselbaink himself denies any wrongdoing.

'I have today, through my lawyers, responded in full to the accusations levelled against me by The Telegraph.

'I was approached by Mr McGarvey and Ms Newell of The Telegraph purporting to be players' agents.

'I did not make any promises in return. I did not ask QPR to purchase any of the players who were said to be managed by Mr McGarvey and Ms Newell and did not and would not recommend the purchase of a player for my personal gain. I deny any accusations of wrongdoing on my part.'

The paper also claims up to eight current or former Premier League managers are implicated in wrongdoing, but have yet to name any.

In response, the Football Association has announced that it will meet City of London police next week to begin it's own investigation.

An FA statement read: “Since these allegations first came to light, The FA has been liaising with The Daily Telegraph and subsequently the City of London Police.

"The FA treats any allegations of this nature seriously and is committed to investigating them thoroughly, in conjunction with any other appropriate body.

"We have requested full and unfettered disclosure of all available material from the Daily Telegraph. This is yet to be provided.

"The FA wants to be in a position to investigate these matters fully at the earliest opportunity and to this end the FA will also be meeting with the City of London police next week.”