In an incredible turn of events, Suriname Vice President - as in, an actual politician - pulled on the shirt of Inter Moengotapoe and played a total of 54 minutes in the team's CONCACAF clash against C.D. Olimpia.

END_OF_DOCUMENT_TOKEN_TO_BE_REPLACED

Why? Because he owns the team, that's why. Oh, and he made himself captain - because why not?

60-year-old Ronnie Brunswijk - who has served as the country's VP since 2020 - is a former rebel leader and was previously the personal bodyguard of Dési Bouterse, who overthrew the government in 1980 via a military coup.

He played up-front and also wore the number 61 in honour of the year he was born.

The 60 year old Vice President of Suriname is playing in CONCACAF because he owns the team 🤣pic.twitter.com/icimSs8yls

However despite being quite literally a powerful presence on the pitch, he was ultimately substituted inside the first 10 minutes of the second half when the team were already 3-0 down.

Inter went on to lose 6-0 - but the elder Brunswijk spent more minutes on the pitch than Damian Brunswijk, his 21-year-old son. Incredible and not unlike the time he and a Chinese businessman decided to buy a club in the country's second division and made them play his son.

Chinese businessman bought Zibo Cuju, a second tier Chinese side, and told the coach to play his son. 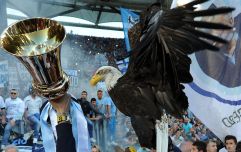 Lazio suspend falconer after video emerges of him cheering Mussolini

END_OF_DOCUMENT_TOKEN_TO_BE_REPLACED

Brunswijk has actually been the player/owner of Inter Moengotapoe since 2002, having helped build the club's stadium, the Ronnie Brunswijkstadion - which is also incredible.

It's worth noting that beyond having formed the Surinamese Liberation Army or 'Jungle Commando', Brunswijk was previously convicted as a drug trafficker and in 2005, he was suspended for allegedly threatening a player at gunpoint during a match. The charge was ultimately dismissed due to a "lack of evidence".

Nevertheless, he's still not the best politician we've seen on a football pitch:

That time Boris did a football at Soccer Aid. pic.twitter.com/7dEY7EPuRk